Long, long ago, the Emperor of China offered the Emperor of Japan a Giant Panda in a gesture of peace. You have been appointed to the delicate task of caring for this politically-important Panda and tending to the Emperor’s illustrious bamboo garden. You must cultivate plots of land using irrigation and intelligence so that bamboo, the only food that the Panda will eat, grows in abundance. But beware of the sacred animal’s uncontrollable appetite for crunchy young sprouts…

Cultivate the land, grow the bamboo, feed the panda, and prove yourself worthy of the Emperor’s trust in Takenoko!

A board game for two to four players by renowned designer Antoine Bauza, Takenoko allows you to work the bamboo plantations and care for the Emperor's panda yourself. Colorful miniatures for the giant panda and the Emperor’s gardener suit the game's light-spirited tone, and these figures will be critical to your designs to grow the most beautiful bamboo stands. Takenoko includes more than four dozen plastic bamboo sections and twenty-eight beautifully illustrated garden plots, which combine to create a unique take on the art of gardening that is as aesthetically pleasing as it is fun. 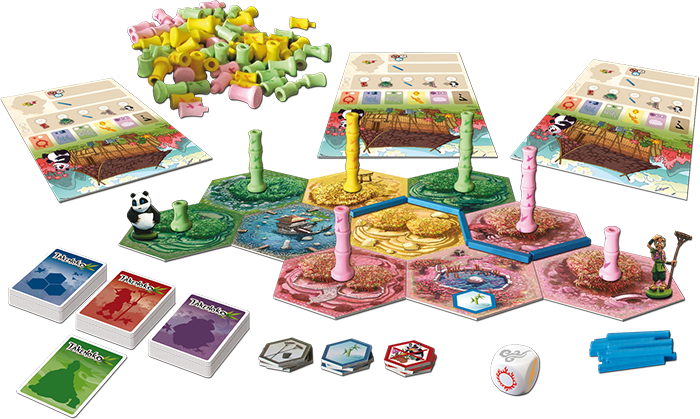 Tending the Garden… and a Giant Panda

In Takenoko, the better you tend your garden, the more prestige you earn. You demonstrate your talents by completing three different types of objectives: 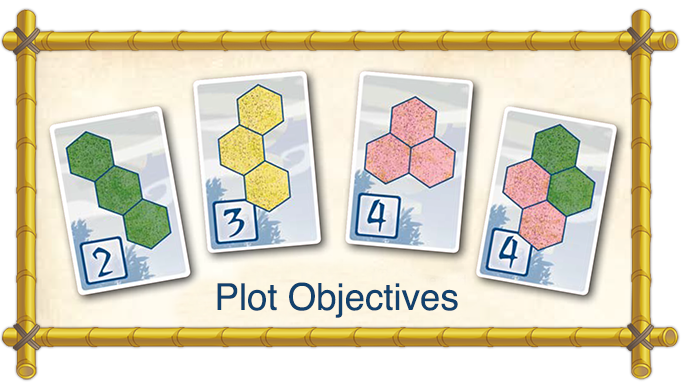 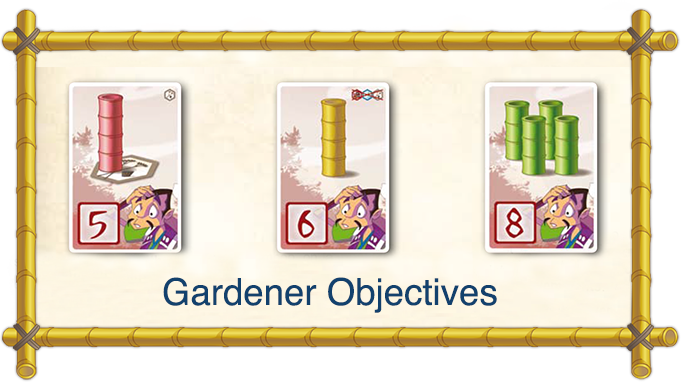 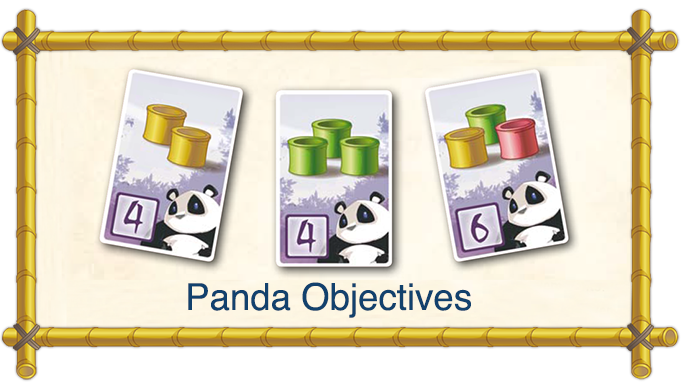 At the end of the game, the player who has scored the most points wins the game and receives the Emperor’s congratulations!

A Game for Players Young and Old

With its adorable miniatures and easy-to-learn rules, Takenoko is an excellent game for younger audiences and casual players. At the same time, its rich strategy offers plenty to challenge and reward even the most veteran gamers. 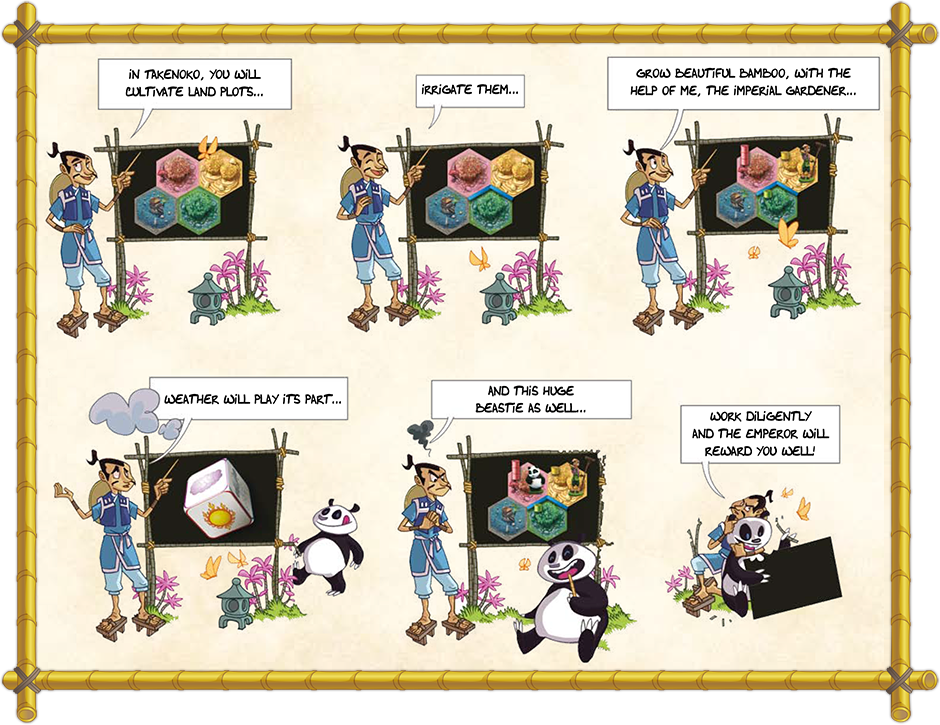 Each round, your turn consists of two quick steps:

Takenoko is a gardening game, so weather plays a big part! There are five possible Weather conditions, and each introduces a different type of opportunity.

For example, the gentle Rain causes the bamboo to grow, allowing you to place a bamboo section on a garden plot of your choice.

But a Storm may simply startle the panda, in which case you move the panda to any garden plot with a bamboo shoot and eat one of its sections.

After you deal with the weather, you can perform any two of the game’s five different actions. You can choose and place a new plot, irrigate the garden, move the gardener, move the panda, or draw an objective. Whichever actions you choose, you cannot take the same action twice in a row.

The Emperor’s garden is a beautiful place and tending it is an art form. Ultimately, if you hope to win the Emperor’s favor, you will need to demonstrate a superior ability to balance your response to sun, wind, and rain, as well as to the giant panda running amok and eating all the bamboo. 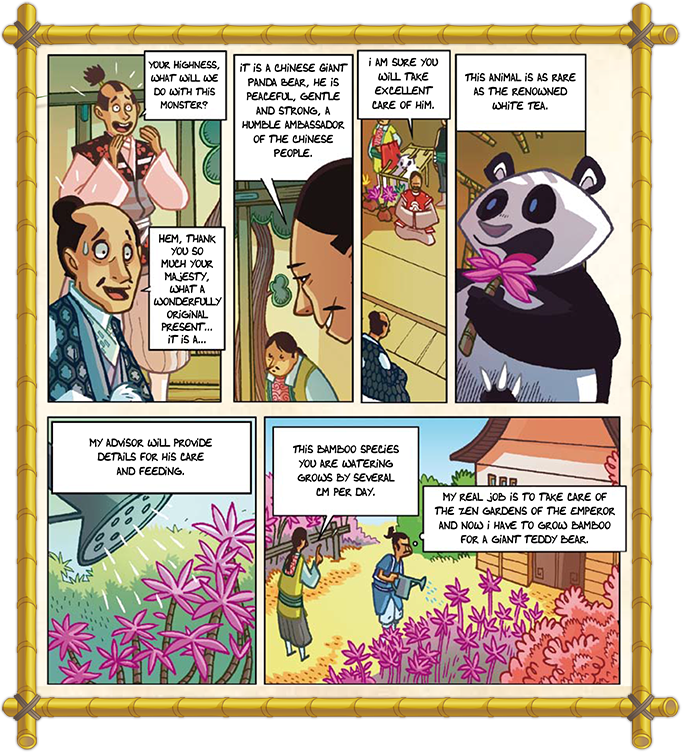 The Gardener and the Panda

Of course, at the heart of Takenoko, you’ll find the Imperial gardener and a giant panda. They are the game’s yin and yang. One helps the garden grow, and the other shovels its bamboo down his throat.

As you direct these unique characters to different garden plots, you track their progress with a pair of brightly painted and sculpted miniatures. 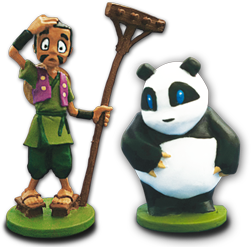 The roly-poly panda rubs its belly as it roams freely through the bamboo garden and snacks on shoots to sate its voracious appetite. Whenever the panda moves to a new garden plot, it eats one of that plot’s bamboo sections. 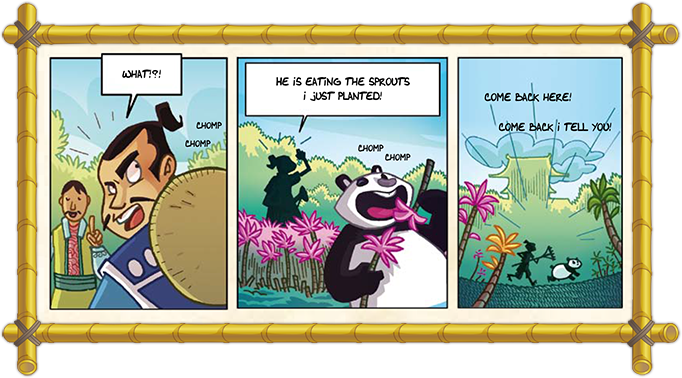